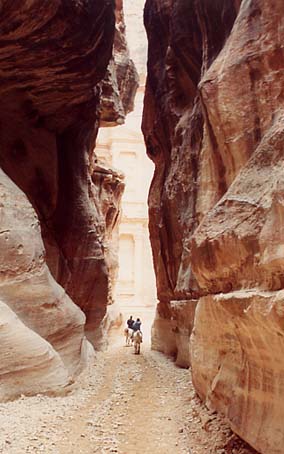 On my way through the "siq" to the city of PETRA - on a horse back!
The siq is approximately 75 meters deep and 1,2 km long.

"Siq - a natural crack in the rocks which the Nabataeans developed into
the city's formal entryway. Along much of the length of the Siq are remains
of the paved Nabataean/Roman road, the two water channels - one rock-cut,
the other made of inter-connected ceramic pipes - which carried fresh water
into the city and scores of funerary niches, stone god blocks and associated
Greek or Nabataean inscriptions." 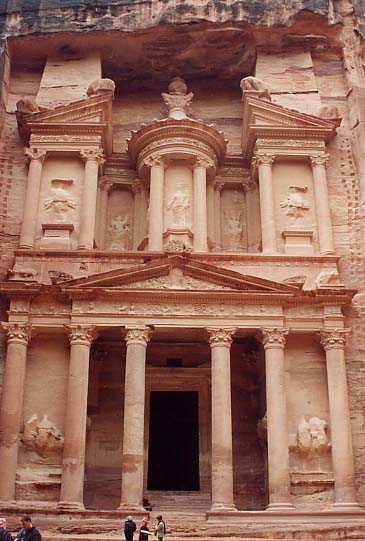 "The Siq ends in front of el-Khazneh, or Khaznet Phar'oun
- 'The treasury' or the 'Pharaoh's treasury' - so called
because the 19th Century bedou inhabitants of the area
thought the urn surmounting the monument held the Pharaoh's treasure."

"This beautiful and well preserved example of Middle Eastern Hellenistic
architecture was a monumental tomb built for a Nabataean king, perhaps
Aretas III, in the 1st Century BC, and probably was later used as a temple
to venerate and worship the kings memory" 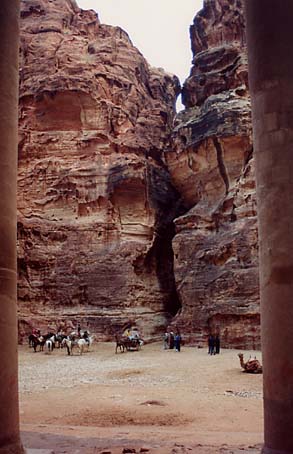 This is the look-out from the 'door', the Siq infront.
Inside is just an empty room - it's not like in the
Indiana Jones - The Last Crusade - .... caves or whatever!